What a crummy movie to start things off with. But really it's perfect. The Jewish paradigm that defines Hollywood is all here. 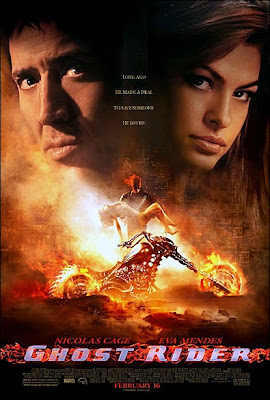 It's the devil! By way of Peter Fonda and his special effects eyes. And right from the get-go he makes no sense. Best not to think about the idiocy of why the devil exists or what the hell he's on about, ha ha ha. Let's just say, at an existential level, that he likes to make people suffer. Don't ask me why. It makes no sense why any creature would want this. Apparently we should understand, as a foundational basis, that a powerful individual would want to rule over as many people as possible even though they don't serve him, or provide any utility, as such. They exist only to suffer. As best as I can make out, the devil seems to spend all his time enlisting more people to suffer under him and in inflicting that suffering. You'd wonder why he bothers. Anyway we should all just take this for granted.

As we'd expect from Hollywood - whose villains are always impossibly and idiotically villainous - the devil kills our hero's father the split-second he cures his lung cancer. What possible purpose is there to this? Imagining for a minute there's some point to the Devil's enlisting of our hero to begin with, why would he instantly get him offside by killing his father for no reason? Because that's how villainous, Hollywood villains are! And oh yeah, in his second appearance the devil is dressed in what is almost precisely the garb of the Catholic hierarchy. No surprises there. This is acceptable in the same way that the devil dressing as a rabbi is unacceptable.

And then there's the devil's son. He's even more idiotic. He has his own joke - A man walks into a bar... and kills everyone for no reason at all! Ha ha ha. Get it? Um... me neither. Why did he do that? Because he's evil! And when you're that evil, logic flies out the window. And apparently we should accept, without too much thought, that the son should want to throw down his father and install his own rule based on the imposition of even greater suffering. The devil's son has three buddies who hiss a lot and are, like all Hollywood villains, beyond reason, beyond finding a common ground and waaaaaay beyond redemption. As ever. Hollywood villains are always like this because that's how they want us to view those who oppose us. Death is the only solution for dealing with them, but really, even that's too good for them.

The heroine is, on her face, a sexy Latina chick with great legs and a spectacular décolletage. I wonder if her 'foreignness' is acceptable here because she overcomes her skepticism of the hero and eventually falls into line with everything he puts forward as being so. Never mind that she's given no choice by way of the plot. Of course it's that way. At no point does she offer any opinion or philosophy or anything of a similar free-thinking nature. She merely proves her worth by helping our hero kill the villain. All things, booty included, goes to he who most fully embraces a Manichean world-view.

But really our heroine is us. She represents the voice of skepticism. She tells our hero, after his unintelligible explanation of his deviltry, that he's either mad or lying. We of course, having seen his flaming skull, mentally yell to her, 'Believe him! You'll die otherwise!'. But she is us and we are yelling at ourselves. It's a reinforcement loop. Eventually she, which is to say us, believes and we sigh in relief. All is as it should be and now we can get on with the killing.

Our Nick Cage hero is a perfect example of what Jewish culture does best - a pastiche. He's part Elvis, part Evel Knievel, part new-age jibber-jabberer. His jabber is some useless nonsense about fear. I dare you to make sense of it. But forget that. Our hero is a success. He is bigger, faster, better and lives a purposeless life dedicated to pandering to the desire of the masses for bigger, faster, better. Never does he really consider others. When he does rescue a damsel in distress he is more intent on inflicting a hellish death on the mini-villain. Really the mini-villain is there so that we may know that our hero can 'see' evil and fry the evil-doer as an appropriate response. Were we to stop and think about it, the mini-villain represents a clearly human opportunity for redemption. And that's precisely why this scene warrants less than five minutes. Don't think folks! Don't ponder at the unknowability of things. Don't ponder at how this fellow came to be a robber. Don't wonder at what we might do to actually help him. We KNOW he is evil and must be killed. The short shrift the damsel receives is explicable by the fact that she is so obviously fat and stupid. Unless of course, she was cast because of the high regard in which Hollywood film-makers hold fat and stupid people. Who knows? But don't doubt that she was deliberately cast on account of her unattractiveness and her ability to be convincingly stupid. Now that I think about it, she is fat and stupid so that our heroine may give her short shrift later. Perfectly forgivable. The fat and stupid deserve nothing less.

Finally, our hero fulfils his side of the bargain and the devil is about to remove the curse. But! Our hero tells him to piss off. He's keeping his infernal power. It's his turn to laugh at the devil. Peter Fonda - stumped! I have no time for phrases like 'synagogue of satan' but - Jesus Christ! This film elicits our admiration for a fellow who enters into a deal with the devil, cheats him, and uses his power to further his self-serving purposeless 'success' and to kill people whom he alone 'knows' are evil. He knows that they are 'evil' because he is 'evil', which is to say 'good'. His desire to inflict such punishment is portrayed as a kind of selflessness in a speech he gives before he rides off into the hellish sunset. Believe it or not, it's a variation of Tom Joad's 'Where there's injustice I'll be there' speech. John Steinbeck rolls over in his grave. Gone is Tom Joad's compassion, heartbreak and offering of succour. Our hero, whom we must admire, wants to live a long life of imposing a hellish death on bag-snatchers. Thus are sins made into virtues.

Never mind that America (and this is quintessentially an American film) is Christian. In spite of the fact that this movie pivots on a religious model, there is no Christ here. No compassion, no redemption, no beatitudes or anything even close. It's like the New Testament had never been written. Catholic churches feature, sure, but only in an idiotic apocryphal context. No one may ever expect any help by entering a church. They are false sanctuaries and powerless in the face of the devil. Always. We should know that they can offer nothing to those facing the cinematically real problems of Old Testament truth. And apart from evangelical old-testament hallelujah-halls, Christian churches are facing a chronic decline in membership. Ha ha ha ha. Of course! Like they're any match for a bazillion-dollar Hollywood propaganda machine.

So, a big two-thumbs up for Ghost Rider! The world is thus, says they. Now. Go off and kill those declared villains, boys and girls. Forget common ground. Forget redemption. Forget your humanity.

"Whose your favourite super-hero? Mine's Ghost Rider! He's cool. He's better than Spider-man because his power is from the Devil! He could even beat Superman. Brrrrm, brrrrm, kapow! Take that, evil guy!"
Posted by nobody at 12:06 PM

Great fantastic review. I've seen that flick. And by jaysuss you did it justice.

Yesh, all that patently evil thru and thru shite. --Cardboard cutouts. Cardboard, one-dimensional people. Like we've already touched upon. They're not foolin' me you know. insert Monty Python skit here ;) -- Like it doesn't have a source, roots, causes and effects, and that there's no possibility for redemption, or fer changing yer mind. hmm. Oh say can you see the future for them thar motherfuckers who actually believe in this shit, who live this way, etc.? Well we are what we "eat". ;)

Too bad about THEIR appetites, eh.

ta mate. I'll be droppin' in to read more.

btw, les wants you to post a link to yer 'nobody' blog at sm. he mentioned that in the latest thread on rp, et al...

Not that that was your point, but it is a struggle not to sound repetitive. Until I light-out and sit in a cave and defeat the self, I am always me.

But anyway... this piece was very long. In the future I'm imagining I'll just be listing bullet-points. Actually it's not my fault, it's Hollywood's. If you think about it, Hollywood is just a machine designed to dress up the same bullshit world-view in a different skin each time.

I'll spend half my time on Asian cinema. Really that's where my head is at. And where the beauty is at too, ha ha.

I'm so glad you're here. I was a bit worried you might have objected to my evil vitriol over at Les' lately. I left you a note in the comments for the 'Japanese Brain-wash' thing. It was more or less what I said over at Les' most recent. And wasn't that nice of him? I've been a fan so long it made my day. And thanks for pointing it out. You know I actually missed it? Ha ha ha. Yoroshiku.

I'm so glad you're here. I was a bit worried you might have objected to my evil vitriol over at Les' lately. I left you a note in the comments for the 'Japanese Brain-wash' thing."

Yesh, it's fun being here. Evil vitriol? pfft. That wasn't evil. Not even close. And not even vitriolic in my books.