Break my heart. A movie full of humans. A movie without artifice. A movie of simple people involved with survival. If you want to know what these people are, look at their faces - they're filthy. These are people of the earth: clever words don't trip from their lips; they strike no poses and they are not cool; fashion, make-up and looking good are alien concepts here. 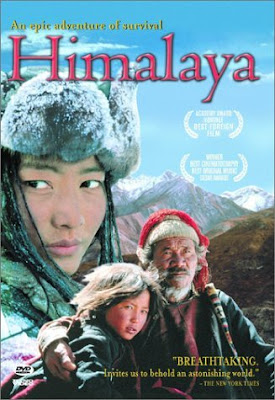 What is there here for clever Westerners to latch on to? If one has an ear with an attention span greater than two and half minutes there is a soundtrack to give you goosebumps. There is the most spectacular cinematography. The light is extraordinary: not the lighting - there isn't any. Texture reigns supreme - there is barely a single straight line in this film. And yes, there's a plot. Of sorts. The protagonists must get from one place to another.

Aha! It's a road-movie, says us. Yes and no, like the road movie as we understand it, the journey is a metaphor for leaving oneself behind and finding oneself anew. But the limited context of however many people can fit in a car is blown apart here. With the exception of the old women and little children, virtually the whole village makes the journey. Or journeys. It is this split that really breaks the road-movie model. The individual is not redefined by his/her relationship with another but with all. The all here includes the environment - the place in which they live is a protagonist. The acknowledging of this is crucial to the arrival at the realisation of who one is. The movie is a contemplation of the self and of selflessness, a selflessness that acknowledges that beyond humans.

In this spirit the director Eric Valli seems almost absent. His touch is as light as falling snow. Cinematic clues are present but imperceptible. Never does he show away.

And here I break with the previous headings of hero, villain etc. The paradigm is non-existent in this film. Feel free to wonder if such descriptions are really necessary. Why is it we feel we need these dichotomies? We view everything through such a lens. An alternative is obviously possible and this film is proof of it. Why are we unable to think outside these limits? And was it always so?

Death opens the film. Our first understanding of the people who inhabit this mountain village is defined by their reactions to death. Be amazed at the lack of hysteria, or even dialogue. If one is given to viewing things in terms of selflessness how should one view the death of a beloved? What does it say of the self? It's a thing to contemplate. Welcome to Himalaya. Everything that takes place in this film has the inevitably of death as its underpinning.

Never in this film do we lay eyes on, or even hear anyone speak of money, glittering prizes, or any other thing of desire. The two protagonists in this film seek nothing for themselves, neither objects, nor power, nor people. Both of the lead characters seek what they think is best for the village. What's best for the village is the most modest thing imaginable - survival. There will be no ribbons for anyone's hair, no gewgaws, no baubles. The closest we come to desire is that of the young boy who marvels that such things as trees exist. 'Will I see one?', he says, wide-eyed with hope and wonder.

When I mentioned survival before, did you have a momentary twinkling of fear in your head, your stomach? I did as I wrote it. It's that sort of word. But the sense of it as such is absent in this film. Survival is merely that which must be done. But fear is addressed. This task falls to the lama, the second son of the chief. Despite having spent his entire life in a monastery he is presented with the mad demand that he lead the life or death journey through the mountains. It is the choice of Siddhartha Gautama arse-about with a guilt trip laid on. Does one choose to join the world or to leave it? Can a person cast off fear if they never face that which inspires it?

The film is driven by the conflict between the ageing chief Tinle and his dead son's best friend Karma. Tinle is old and rigid in his thinking. Karma is younger and still possessed of impetuousness. Neither of them are wrong. Neither of them is ultimately right either. Absent is any sense of 'good' or 'bad'. Both men fail due to their sense of self-regard. Tinle considers his objections to Karma (whom the village wants as leader now that Tinle's son is dead) greater than the needs of the village. Karma, in reacting to this, also reacts to Tinle's faith in tradition and geomancy. To hell with the lamas, says Karma. The geomancy here, even for this confirmed nihilist, makes sense. Watch it and wonder.

Critical voices in the village are common. But perhaps 'critical' is the wrong word. Absent are cheap shots, point-scoring, or cleverness. No one tries to 'win' an argument. Harmony is sought and if rebuffed, further words are left unsaid. Nor are there factions, plots, or dissembling - everything is in the open. Us and Them is an alien concept here. All do what they think is best for the village, and Tinle and Karma aside, every criticism is a seeking of harmony.

Finally the separately led caravans join and the village is united. Certainly plot devices are used to bring this about, but it's all in a good cause, ha ha. Tinle has softened and realises the foolishness of objecting to Karma, whilst Karma understands the rightness of Tinle's traditional knowledge. As Tinle lays dying, Karma declares he'd dreamt that Tinle was his father. 'You are too much like me to be my son,' says Tinle. 'The gods are triumphant!' cry all. It's a cry fraught with meaning. And yet we see no gods. We see only the people united, with each other, and with the world. Their cries express their joy at the possible achieved.

The film closes, rightly, with the boy marvelling at a tree. Says the director - no greater reward exists than the opportunity to be filled with wonder.

How tiresome. It's all about me isn't it? But if a movie screened in a cinema and nobody came, would we know the sound of one hand clapping? Ha ha ha - don't worry I don't get it either. But a film doesn't exist in isolation. It has to be watched or it makes no sense.

It was tremendously difficult to order my thoughts about this film. It took days of countless rewrites, believe it or not. That idiot Ghost Rider thing took minutes. The Old Testament / us and them / good and evil paradigm is the sea in which my thoughts have always swum. Blueberry took this paradigm template and turned it on its head. Himalaya lacks it utterly. Films like this challenge one's understandings. It's enough to make one's mind untethered. But can a journey be begun without doing precisely this? And a journey to where? To a tree perhaps, to marvel? It's an answer as true as any other.
Posted by nobody at 11:57 AM

It's always about 'nobody' Booyakka!

Such 'pun'-ishing 'tor'-ment. Can him allay her? I wouldn't want tibet on it.

That was a great review - I will have to try and get my hands on the movie ;)

The film closes, rightly, with the boy marvelling at a tree. Says the director - no greater reward exists than the opportunity to be filled with wonder.

Brings to mind one of Buddha's famous quotes

“If we could see the miracle of a single flower clearly, our whole life would change.”

Thanks for that. I'll keep an eye out for it. I liked that poetry driven track a lot. Very nice.