Oh all right, it's actually Scary Movie 4. But if I tear this Jewish farce apart, I tear them all apart. It's a simple enough exercise.

We're all perfectly familiar with film description shorthand. If a film is described as a heist flick, or a road movie, or a romantic comedy we instantly arrive at a broad understanding. But for some reason the description Jewish farce barely exists anywhere. I've only seen it in the English Timeout Film Guide. The first time I saw it there, my eyebrows shot up and wondered at the category. But it's marvellously accurate. In two brief words we've perfectly described Mel Brooks, the Zucker Brothers, and anything starring Leslie Nielsen. 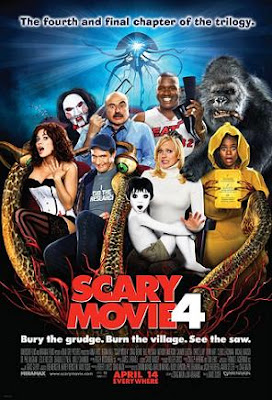 Without an accurate description we just call these films comedy. But Scary Movie 4 is to comedy what dogs playing pool is to art. Think of Life Of Brian, City Lights and A Midsummer Night's Dream. What do they have that Scary Movie 4 doesn't? I'm going to call it wit. Wit is an interesting word. It has two meanings and they're both expressions of intelligence. And what distinguishes Jewish farce is its witlessness.

As such, there's not a lot to it. It does not have layers. It does not work on several levels. In fact, if you analyse it, Jewish farce has precisely four gags which are merely repeated ad nauseam. And here are the four gags -

This is the most juvenile of them all. Anything that involves an orifice, or what comes out of it, qualifies. In SM4 we have: copious snot and the ashes of dead people (seriously) coming out the nose, the latter covering a young girl; President Leslie Nielsen spits milk on kids who spit it back at him; the clouds look like an arse that shits lightning and smells like a turd; A blind girl shits loudly in public; and a paralysed old woman is washed in her own urine. Is there humour stupider than this? I can't think of any.

Actually maybe this is stupider than the gross-out. It's certainly nastier. Gross-out humour merely instils bad manners. Humour based on laughing at the pain and suffering of others instils something altogether different. It's a crucial ingredient of us-and-them. 'Them', of course are beasts, untermenschen for whom we feel no sympathy. Brutal motherfuckers since the dawn of time have laughed at what we laugh at in SM4.

With but the slightest variations of script, art-direction and music, the depictions of children having their heads smashed in car doors, old women being beaten and thrown in the sewer, and innocents being shot and stabbed, would be something unspeakable. Here's an ugly thought - What if a bunch of goyim film-makers depicted these things being done to Jews, instead of vice versa?

Let's not go that far. Let's just say that in my notes that list examples of each of the four gags in this Jewish farce, the number of jokes based on violent brutality was exceeded only by the next category.

In a Jewish farce, ideally no opportunity should be passed up as a chance to insert a sexual reference. A village feast features two suckling pigs on a platter which are, of course, rooting each other. The alien probe from War of the Worlds humps a vacuum cleaner. Every other female character except the heroine is a slut who will fuck anyone, even aliens. When the black girl/uber slut talks in her sleep, of course she says 'Don't pee on me!' It's not enough to have sexual references every thirty seconds, the references have to be perverse to the nth degree. That this film didn't contain any bestiality, necrophilia, or coprophagia is less a testament to the director's sense of restraint than it is to a lack of opportunity by way of plot requirements.

What would Jewish farce be without the opportunity to laugh at those who are different to us? Apparently it's okay for white people to laugh at black people for being stupid, jewellery obsessed sluts and homosexuals who speak unintelligibly, because black people are given equal opportunity to laugh at white people as uptight, stuck-up, perpetually uncool dickheads who can't dance. The fact that everyone gets spattered in shit somehow makes it okay. And Arabs of course cop special treatment. They are not only pointlessly murderous terrorists but stupid with it - quite right that they should be beaten by an angry mob. Magically there are no Jewish characters in this quintessentially Jewish film.

The endless equal opportunity racism of Jewish farces, which could more accurately be called a sowing of discord, is the flip side of the brutality gag listed above. It's so much easier to kill wogs, gooks and gyppos when we view them as objects of scorn.

The idea that this racism is some kind of light-hearted catharsis is bullshit. Laughing at niggers and crackers can have no good effect. None. It's merely another push on the centrifugal wheel that would have us all tumbling away from each other. A society where everyone laughs at each other is an anti-society, doomed to fly apart. A society where everyone laughs with each other is a place that draws people together, their differences neither here nor there.

The secret to success with Jewish farce isn't that any of the gags are particularly funny. The secret is to not give anyone time to think. To this end no opportunity for brutality, smut and racism can be passed up. And ideally any given gag would be an expression of all three.

I will concede that such witless humour has existed in every form of comedy ever. They will be found in the aforementioned Python, Chaplin and Shakespeare. Except perhaps for the racism. Do those three possess mindless racist caricatures? I'm struggling to think. I know for a fact that French people find the 'French Taunter' of Holy Grail hysterical. Arguably it's more a comment on English cluelessness (and the impossibility of translating idioms) than it is on the French. But it's a moot point. For each of these comedic geniuses the dim-witted elements of brutality, smut and (possible) racism represent the tiniest minority of their work. In Jewish farce, it's all there is.

For mine it's a perfect statement of a singular racist mindset. If Jews truly viewed their neighbours as their brothers and sisters, no different to themselves, they'd marry them and cease to be 'other'. But that will never happen. Jewish people are nothing if they are not this 'other'. They don't have a problem with this particular race or that one. They have a problem with all of them. Every race threatens their otherness equally. And to maintain a separate identity, racism must be encouraged. Not overtly, of course. Overt racism could turn and bite them on the arse. The racism must be insidious. Don't confuse this with subtlety. No one could ever accuse Jewish farce of that. But it's definitely insidious. And it's definitely racist. Jews wouldn't be Jews if they weren't racist.

Have I ruined Jewish farces for you now? Perhaps, perhaps not. But hopefully you'll better understand what it is you're watching.
Posted by nobody at 4:19 PM

I have a request:
Can you do FIGHT CLUB and THE MATRIX?

Here is the link to watch Fight Club.
http://www.watch-movies.net/s/fight_club.html

I don't need a link. I possess both flicks already. Maybe I should do Fight Club. I don't know if I could be fagged sitting through Matrix again. And then there's part 2 and 3. Aargh. Too messy. Too big.

But Fight Club maybe. Leave it with me. Yoroshiku.

i'm wondering what your take on "blazing saddles" is. i personally find it hilarious. the elements of which you speak are there (racism, farting), but it seems to me to be done in an archie bunker / monty-python-frenchman fashion, pointing out the idiocy of the bigots.
what say you?

Good question. I haven't seen it for a while. Why don't I pop down the video store have a look and see what I make of it. Mind you, I'm thinking I'd attack it from an angle that's been running through my head for a while now. I'm not quite sure what it is but it's something along the lines of perhaps we'd be better off without any narratives at all.

The problem is that it's such an absurdly huge topic that it defies being stuffed into a single container, if you know what I mean.