The Lord of the Rings

Let me say right from the outset that I was the original Lord of the Rings fan. By the time I was fifteen I had already read it six times. In high school I hung with two other huge fans. One had read it fourteen times. The three of us were the Lord of the Rings guys. Believe it or not we weren't nerds, and the costume party we organised each year on September 22 (Bilbo and Frodo's common birthday) was the biggest, most anticipated party there was. I recall going as a nazgul, ha ha. It was all good fun.

Unsophisticated self-made fun aside, back then, there was nothing beyond the books themselves. There were no DVD's, no collectibles, no nothing. There was just the trilogy and us sitting around in the quadrangle endlessly talking about them. And sure we all argued about what a movie would be like, who would play whom, and whether balrogs had actual wings, etc. Cut to thirty years later and the imagined movie was actually made. And it was fantastic. Hats off to the director Peter Jackson. Somehow everything looked and felt just as I'd imagined it. 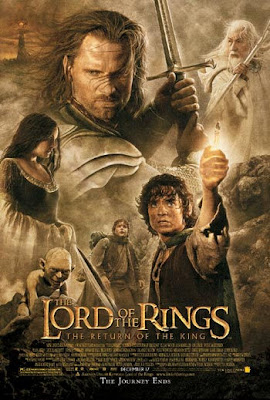 What did it all mean? Was Grima Wormtongue this? Was Saruman that? What did Sauron represent? Says I, they can represent whatever you want. Weirdly enough, this whole conversation already took place following the book's release, with everyone perfectly convinced it was an allegory for WWII. The author emphatically denied it. Tolkien was the Oxford don, rapt with the mythos of Northern Europe. His obsession was with the relationship between language, myth and time. He was one of the key authorities on Beowulf, the earliest written expression of English ever. Coming from this depth of knowledge, and in a desire to further it, Tolkien created his own languages and myths. It was this depth that led him to succeed. And the proof is in the pudding. There is something complete, something right about LOTR.

Here's a metaphor. Imagine that the original story from which a myth springs is a jagged unlovely rock. The retelling of a story over time acts as a river rolling and shaping this rock until a perfect smooth pebble is produced. And we as humans know, millennia later, that there is something right about this pebble, this story. This is what differentiates myths from, I don't know, Raymond Carver, ha ha. A myth speaks to us in a way that whatever humdrum story inspired it would have left us unmoved. This timeworn thing is possessed of a universality, a timeless rightness.

What Tolkien achieved was a complete template of universality. You can apply it this way, that way, and regardless of your view, it will describe what you see. And that's why I'm only interested in LOTR in terms of the big picture. Was that a pun? Hmm... not a very good one.

And this was where I had a problem with The Lord of the Rings. It wasn't in the script and nor could it be laid at the feet of Peter Jackson. It was the timing. The first film was released in 2001, the second in 2002, and the third in 2003. This period was precisely the run-up from the 911 attacks through to the War in Iraq. It was also the run-up to my radicalisation, ha ha. You too? Sure. And as each film came out, the world was progressively closer to war, yours truly was that much more radical, and each episode left me in greater dismay.

Let's not forget - The Lord of the Rings was absolutely the biggest thing going at the time. It monstered the box office and swept the academy awards. Everybody saw it. And lots of people saw it lots of times. Me, I say films have an effect, and what effect did this triple film epic have? When the punters walked out of the cinema how would they view the world?

Said LOTR, one must view the world in a Manichean fashion. Which is to say, there is good and there is evil, and there is nothing in between. No common ground would ever be found with those who are Evil (with a capital E). Anyone who entertained the idea that one could reason with, or appease this obvious enemy-who-could-be-no-other-thing was a fool, a coward, or a traitor.

For us as the audience, this was made perfectly clear. The enemy were some variation of sub-human. They were as beastly as it's possible to make a man, without him becoming an insect or an alien or somesuch. Each orc was the befanged, slavering Hun taken to the nth degree. Certainly these creatures could utter some variety of accented jibber-jabber but really there was no point talking to them. You don't talk to a thing that wants to eat you. You just kill it.

Their leader of course was the perfect distillation of Evil. So great was the power of his evil that he could influence and summon non-humans from every corner of the world. Certainly we must kill as many non-humans as possible but primarily we must kill him. Otherwise we would never be free, nor would our babies remain uneaten.

It's all in the timing

The Lord of the Rings was part of a trio. In 2001 we had Michael Bay's Pearl Harbour. Just the ticket to set the stage for PNAC's 'new Pearl Harbour', otherwise known as 911. This was past as present. In 2002 Black Hawk Down turned up as an heroic towelhead slaughter-fest. This was present as future. And providing a counterpoint, rising to crescendo, was The Lord of the Rings, 2001, 2 and 3. It was the ring-cycle to bring them all - past, present and future - and in the cinema darkness bind them. With every other medium screaming the inevitability of war this universal template could speak of no other thing. It was the war film for people who didn't watch war films. Mum and Dad and all the kids could watch this together and know the eternal rightness of slaughtering swarthy non-humans.

I read LOTR as an adolescent, many moons ago. Only read it once, and (curiously) don't really recall much of it. Was it something I was smoking or what...hmmm?

But I do remember enjoying it, the story, wayy back then. Mayhaps one day, I'll give it a re-read, if I'm so inclined.

But the second I heard about the movie, I knew what/how it was going to be! Then the massive hype followed. Did not, would not see it. Then one night husband and I rented it, deciding to give it a chance...and we couldn't get past more than an hour or so of it. blecch. Hated it. It was as I had guessed/feared. Natch we haven't even given the sequels a look-see.

In any case this is a great, concise review/analysis. I've really enjoyed this, I have. It wouldn't be accurate or fair to call these merely movie reviews since they're so much more. Ta for that.

I wonder if dead artists actually turn in their graves when others badly interpret or misinterpret their works? Maybe they simply return to haunt those others for a lifetime or two? I know I would. haha ;)

Have fun watching the French/Aussie match thingy, with yer Pa. Me, I'm rooting for the underdog. So which team is that? Ah needs to know, else I'll only be able to shout, "go team, go!" !

Whoo-hoo! I have not read your article and I have my finger crossed that i will like it (since you said I may not like it)

Now that I read your review. I have noticed how the good guys were all White and Orcs were Non-Whites.

Hmmm, one thinks of War on Terror. OR Native American vs White American Wars.

Notice how Non-Whites(Orcs) are portrayed as savages who cannot be reasoned with.

you're so gifted as a writer:)

i too remb strong feelings of love i had for this epic, in high school. one of my kids has read the books, she started w/the hobbit in the 2nd grade:)
tough read for sure.. i told her she'd probably want a revisit later in life:)
i've only read them twice... but my love for tolki's has not dimmed over the years..

of course the kids loved the movies, as did i, even in explaining that huge swaths of storyline were swept away by its being brought to film.

they made me cry rembn'g the world as it had been, or what i thought it had been, when i had read the stories as a teen, and how much the world seem'd to've changed for the worse so quickly.

i'd felt very alone and cut off after 911, living here in what felt like a firebase incountry of some enemy the north40 of dallas proper, dark heart of the evil empire west...bush country... and longed for a gandalf and a band of compatriots (other than my small family) w/which to weather the storms to come.
the enemy to me seem'd to be everywhere and nowhere, invisible yet omnipresent.. i still feel that in darker days, especially when the news of the world reflects the ugliness my country has exponentially become since my awakening.

the only stand i sometimes feel i can make is akin to gandalf on that precipice w/the flame demon. i know i can't stop it, but i can maybe hold it at bay, long enough for those i love to escape. that's the hope.. anyway.

the epic is a boy's club to be sure, but
i did enjoy the strong but miniscule female influences, Arwen, Galandriel & especially Eowyn..... and of course my girls appreciated their strengths :)

Ah, you're all too kind by half.

To be honest I liked this film. I know it's dreadful but those cavalry charges at the end knocked me out of my chair. It was really something. But to view anything Hollywood does in isolation is a mistake. We're meant to do that sure, but Hollywood doesn't work that way. It has an agenda. Always.

And kikz, that's the nicest thing anyone ever said to me. Don't do it again or I might go getting a swell head. Like I said to annemarie way back when, compliments make me uncomfortable, ha ha.

As for AM, hey matey. Well rugby union is a much more even competition than, say, the cricket. The biggies right now are Australia, South Africa, New Zealand and England. And the French are very good and have this mad habit of pulling rabbits out of hats and killing giants with them. There's a graphic mixed metaphor for you, ha ha.

Australia and France both have new coaches and lots of new players in their teams so they were both unknown quantities. And subsequently it was a scrappy game and neither side really had their act together. Australia won but didn't impress hugely. The old man was a bit grumpy and talked fondly of the old days. But we enjoyed it well enough.

Hey anon, dimension it ; ) Grab a moniker mate and pile in anytime.