This is a film based on a single famous joke. It's the filthiest joke in existence. In this film we hear it over and over again, along with discussions of what it all means.

I was actually slated to appear in this film, believe it or not. The director and crew turned up at my house, the camera rolled, and I told my version. Here it is -

A man walks into a talent agent's office and says the agent should put him and his family on his books. 'Why? What do you do?' says the agent. 'Well, we all come out on stage...' says the man and he then goes on to describe how each member of the family performs the most perverse, violent, and appalling acts on each other. Nothing is left to the imagination - incest, pedophilia, bestiality, coprophagia, sadism, you name it. It's goes on and on. Everyone in the family, kids included, gets raped, brutalised and tortured - all rising to an unspeakable crescendo with blood, fecal matter and bodily fluids spraying in all directions.
'Bloody Hell!', says the agent, 'What the heck do you call that?'
'Jewish Comedy!' he says.

Well, that was the end of my Hollywood career. Humourless gits. Never mind! 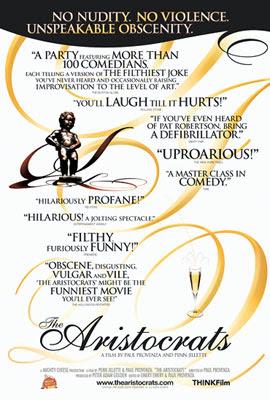 It's not easy being a comedian. It's all in the timing, sure, but it's also all about having a team of writers to come up with the gags. What to do without your writers? Thank God for this filthy chestnut! The only parts of it one needs to remember are the talent agent introduction, and the 'Aristocrats!' punch line. The in-between bits you can make up, limited only by your imagination. And all you have to do is come up with the most extreme combination of bodily functions, perverse sex, and violence.

Gosh, that's weird... those three things are precisely the first three of the four gags that comprise the totality of Jewish farce. The fourth was racism. Hmm... there doesn't seem to be any racism in this gag. Never mind, this joke is nothing if not versatile. With a flick of the wrist, one clever comedian appearing in this film turns the punch line into 'Nigger Cunts!' Bingo! Four from four.

Might this be the most Jewish joke ever? I didn't count, but easily half of the hundred or so comedians appearing in this flick were Jewish. The rest just wish they were - like Robin Williams. Honestly, could he be any more Jewish? Otherwise, what's going on here? Why is it that the lowest of low-brow smut, violence and pornography invariably seems to come from Jewish sources? Unsurprisingly in this film's discussion of The Aristocrats and its implications, all is dissected except for this angle.

Same same on wikipedia. Well, no surprises there. Wikipedia gives this joke an undeserved pedigree straight from the English canon, by way of Charles Dickens, no less. Here it is -

'He has a very nice face and style, really,' said Mrs Kenwigs.
'He certainly has,' added Miss Petowker. 'There's something in his appearance quite—dear, dear, what's that word again?'
'What word?' inquired Mr. Lillyvick.
'Why—dear me, how stupid I am,' replied Miss Petowker, hesitating. 'What do you call it when Lords break off door-knockers and beat policemen, and play at coaches with other people's money, and all that sort of thing?'
'Aristocratic?' suggested the collector.

Hmm... hands up who can spot the fundamental difference here? For mine, Dickens is commenting on the dichotomy of the behaviour of the ruling classes and how they would wish to represent themselves. The Aristocrats joke is utterly free of any such societal reflection. I doubt anyone hearing it would laugh and say, "It's funny because it's true. The aristocracy does like to like to eat fecal matter, ha ha ha!" Says I, the connection between The Aristocrats joke and the piece from Dickens is superficial, self-serving bullshit.

The point of The Aristocrats joke is to most perfectly embrace extreme perversity. One 'succeeds' with The Aristocrats by plumbing the depths of human iniquity. Actually scraping the bottom of the barrel falls short. One must dig right through the bottom, find a sewer line, and then wallow in the excrement.

Have we tapped into some fundamental human trait here? Do other people, particularly those without Jews redefining their culture for them, do this too? I scratch my head and fail to come up with anyone. Certainly other people are earthy. Straight away I think of the Japanese. Believe it or not, they are a tremendously earthy people. In shops you can buy 'unchi' hats shaped like an idealised spiralling turd (unchi = pooh). Pooh is part of life and they're cool with that. Granma might purse her lips, but that's about it.

I understand I might make people uncomfortable on account of the fact that they watched this film, and all those other Jewish farces, and laughed their heads off. Don't worry I did it too. And in small doses I don't know that there's much wrong with it. Even Shakespeare had his moments of coarseness. But a few decades ago there was precious little of this sort of thing and now we seem to be wallowing in it. Is there any purpose served by this? Unsurprisingly people have sought to justify it, indeed to hold it up as some kind of worthy societal campaign.

Does embracing one extreme lessen the other opposite extreme? Or reinforce it? By what mad logic is a society that is shocked by a naked breast going to be cured by the media airing discussions about having children swallow semen mixed with shit? Honestly. What madness is this?

It seems that we in the West are now given to vaguely agreeing that it is good to smash taboos and that somehow, once they've all been smashed, we will truly be free, or something. Really? Or is this just more bullshit? Does anyone remember the scene in Groundhog Day where Bill Murray is driving two local barfly buddies home? Murray - "It's the same things your whole life. 'Clean up your room', 'Stand up straight', 'Pick up your feet', 'Take it like a man', 'Be nice to your sister', 'Don't mix beer and wine, ever'. Oh yeah, 'Don't drive on the railroad track.'" Says the barfly as they drive into the path of an oncoming train, "Er, Phil. That's one I happen to agree with..."

Three cheers for the voice of common sense. I know that this is a variation of modernist heresy, but perhaps there are sexual taboos worth having too? "Er, Phil. That one about not raping children is one I happen to agree with..." Would anyone say that that was an extremist view? Or would we say such views were fair enough? Okay, so why do we think so little of films like this that make light of it, that push it into the vernacular as a subject with no great opprobrium attached to it? How is it that Andy Richter can regale his own infant, whom he is holding in his arms, with a story about fucking the infant's mother up the arse and then eating shit, and no one bats an eyelid? What the fuck is wrong with him? What the fuck is wrong with us? And what do you have to do to be called a 'sick freak' in this joint? I shake my head.

Don't dismiss all this with, 'It's only a movie'. American kids are now perfectly familiar with perversities that I as a teenager had no idea existed. Hell, I expect they know of things that never even occurred to Caligula. But then again, neither I nor Caligula had films like this to shape our thoughts. But that's today's America for you - a culture that would make Caligula blush. And all courtesy of the Jews and their none-may-stand-against-it media machine.

Anyway, a man walks into a talent agents and says, "I've got a great new act."
Says the agent, "Does it have infantile gross-out humour, perverse sex, mindless brutality, and racism?"
"Does it ever! It represents a new nadir in human depravity."
"Boychik, welcome to Hollywood!"
Posted by nobody at 11:13 AM

Good one Nobody. I have read about this film and its jewish-ness before.

I think the jews got this from Talmud. They used to practice all this sick things in Babylon where the locals were just as sick as them. But once they came to Christian Europe, they had to clean their acts together.

The talmud also says all the world's riches will belong to the jews. That's is why communist jews wanted no borders and private property.

Everything is connected to their talmud. Check it out ti see why jews act like vampires.