Did somebody say U2? Not me - whatever it was they had got lost when they started hanging with Paul Wolfowitz and hawking credit cards. Forget them. Watch this film instead and see how there are some events that will never be done justice by any pop ditty regardless of how many people flick their bics. 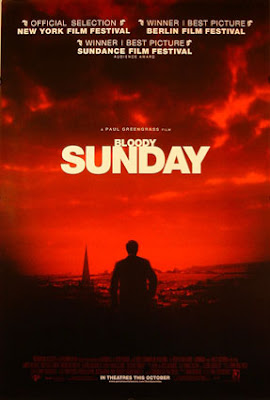 Paul Greengrass's retelling of Bloody Sunday will do your head in. We're all sick of docudrama and wobbly-cam now, sure, but here it works to perfection. Everything in Bloody Sunday feels very, very real. And its unromanticised discussion of non-violence provides no pat answers, only ambiguity. No happy endings here. This is not Attenborough's Gandhi. In Bloody Sunday, non-violence does not win the day. The despair in the eyes of those in the film who'd held out hope for a non-violent resistance is crushing. The lead character's prediction that the IRA's numbers would be swelled all come true. The Catholics of Derry learned the truth of non-violence. It's not non-violent at all. It's extremely violent and the violence runs one way.

Arguably the events of Bloody Sunday contributed to the peace that currently exists in Northern Ireland. It didn't do it on its own of course. There were many many bloody events on that particular centuries-long journey. We're familiar with a handful of them. We saw In the Name Of The Father, Michael Collins, and the more recent The Wind That Shakes The Barley. These events helped pave the road to peace.

Go read that last sentence again because it's actually bullshit. The murderous events depicted in those movies didn't pave the road to peace at all. They achieved nothing beyond leaving more bodies in the bloody trail left by a brutal murderous occupation. This trail, in and of itself, leads to nowhere but to more of the same. The road to peace requires an about-face and a journey back over those bodies. What actually paves this road is the awareness, by those other than the oppressed, that the bodies exist. In a campaign of non-violence, it's this awareness that counts. This awareness leads to the crucial answer to the crucial problem - the oppressor's own view of what they're doing. And this requires the shaming of the oppressors in the eyes of others. Passively allowing oneself to be shot, in and of itself, achieves nothing.

Without opposition and left to their own devices those who'd shoot women and children will carry on doing so without batting an eyelid. Unless their own mothers, wives, and daughters are sickened and appalled by what they've done, it's all good. Those with a mindset that they are amongst a lesser people actually get a thrill from shooting them down. When they go home to their families and friends and are met with approval, the mindset is reinforced. What other people think of you is a tremendously powerful stimulant. If everyone says it's good, it must be good.

Reading the above, did the occupation of Palestine pop into your head? It was in mine as I wrote it. Indeed thoughts of Palestine floated through my head the whole time I watched this film. Interestingly, the Paras in Bloody Sunday (the most murderous of the English occupiers in Ireland at the time) wear a distinctive paratrooper's helmet that spookily resembles the helmets of Israeli troops. In fact it's arguable that Bloody Sunday is as close to a filmic depiction of the Israeli occupation of Palestine as we're ever going to get.

It falls far short of course. The famous events in Derry on January 30, 1972, take place virtually every day in Palestine. Only thirteen people actually died in Bloody Sunday. I don't mean to belittle this, but the scenes of Derry Hospital's corridors stacked with corpses is standard stuff in Gaza. Bloody Sunday falls every week there. So where's the outrage? Where are the movies? Where's the U2 song? When will these murderous Ashkenazi motherfuckers, who make the English in Ireland look like hapless amateurs, be shamed in the eyes of the world?

No time soon - certainly not if they have anything to do with it. And they do have something to do with it. The media is theirs. It's a bloc-media under their control. The point I'm making here, about non-violence only working by means of its airing and public shaming, is one the ethnic cleansing Ashkenazis of the world understand utterly. They wrote the book on human perception. No one understands better the schism between reality and misrepresentation and the inhuman shit one can get away with when armed with this knowledge.

If you control the media, you control public perception. If you control public perception, you render non-violent opposition to yourself worthless. In fact it would pay you to promote non-violence since it's so much easier to kill people when they don't shoot back. Gee whiz, and how has non-violence been portrayed in the bloc-media? Think back now to all the discussions of the rightness of non-violence we've been party to, and try to think of any mention of the beyond-crucial aspect of its depiction and subsequent shaming of its perpetrators. Anything? No, me neither. There's been no such discussion because that would in no way suit the media and their support of Ashkenazi ethnic cleansing.

Ireland is another story. Those who own the bloc-media have no stake in Ireland that will be harmed by our outrage at yesteryear's oppression. Thus we are permitted to shake our collective fist at the English of decades ago.

In some ways I'm not so much reviewing this film as I am a film that doesn't exist. That it doesn't exist is no criticism of Bloody Sunday. It's a great film. But the past is history and what's happening today, right this very minute, is another story. And that story is a film that will never be made.

And soon enough we'll all have a taste of what the Irish copped and what the Palestinians still do. Will we choose violence or non-violence? Will we instil fear or shame? Like Bloody Sunday, I say there's a case to be made for both. But really there is no pat answer. But here's a thought to keep in mind (by way a bastardised zen koan) - If a monk burns in a plaza and no one sees, will it be of any use?
Posted by nobody at 4:39 PM

Another movie I have never heard off.

NOBODY, you need to watch better movies. I have links to most movies here.

Perhaps you mean I should watch more popular movies? Or more Hollywood blockbuster-ish movies? Because I have to take issue with your description of 'better'. Last comments you were urging me to watch Dark Knight. You'll never get me to agree with you that Dark Knight is 'better' than Bloody Sunday.

Otherwise it may have escaped your attention that I barely wrote about this flick at all. It helps if you've seen it, sure, but otherwise I... oh forget it. I actually discuss this over at the church blog.

And really mate, you need to understand that I ain't here for the teen market. I'm not a teenager and I don't have teenage tastes. Can you dig it?

I can understand you. Your not into popular American movies. I assume you wont watch the new Mummy movie. Either way the above links are still good for watching any movies. I would bookmark them mate.

Another thing, have you ever met an Aboriginal? In America, its near impossible to see a Native American. I assume Australia has done a better job.

As for Aborigines, I've known a few. One ended up a very big deal in the arts world. Mostly though, Aborigines copped pretty much the same shit American Indians copped. Australian Aborigines weren't as numerous as the American Aborigines, nor were they as organised in terms of being able to fight back. Subsequently the smashing of them didn't require armies. They were killed and scattered on a less 'grand' ad hoc basis. I wrote my views on the matter here.

Reminds me of George Carlin but with fewer swearwords. :)

I have a friend? (Irish - Dublin) who says Ireland is as bad as ever as the drug groups have taken over from the IRA types and there are still as many drive by shootings etc.
Tony
ps Dark Knight? Mummy movies? - shit for brains?? or under 25??
In the area where I live in country Queensland Aust. there are no aboriginals - we killed them all - long ago!

excellent you know the truth about the Askenaz. The set up the 9/11 situation and the next day had the Patriot Act.. a Police State Law.. set up in America. JFK was planning to roll back Askenaz power in the early 1960s, was murdered, then they went crazy with 1964 civil rights act, 1965 immigration act, 1973 Abortion act, all to bring down the white majority. They constantly lace all US media with marxism zionism, constanly promote interracial couples, etc etc.